Well, at least on this post, it is! He he! My dear friend, Selma, let me borrow this template so I could reveal some personal facts that even I myself might not have thought of in a long while. But I can’t promise anything special here. Just the facts, people. Just the facts.

So, here’s to boring the whole planet… 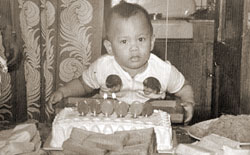 My earliest memory is…..

… my 2nd birthday party. Manila, Philippines. 1965. I was wearing a t-shirt that had John, Paul, George and Ringo’s heads printed on it. The whole neighborhood was in the house paying their respects. All eyes were on me. Gifts. Offerings. I got ’em! I even got the biggest slice of cake, I believe. Why not? It was mine, after all. It was then that I realized I was destined to be a rock god. California, here I come.

… was dubbed Mr. KISS. Since their music was pretty much all the education I was interested in… teaching everyone about, that is! 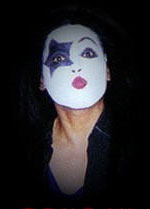 My first relationship was….

… with a (third) cousin! Kissing cousins, that’s right. Hey, give me a break! I was 15, for crying out loud! What did I know back then?

… the weather. Life is a much better subject… yours and mine, that is.

My most treasured possession is….

… my faith in God. As with tangible things, well… it’s easy to lose your grip on anything in this world. Especially, when you’re dead.

… eaten too much for dinner. I’ve got a gallon of tapioca pudding in the fridge. But, you can’t have your pudding if you don’t eat your meat, right? Well, I ate so much meat, now there’s no room left for the pudding! Nope, really can’t do it. Might squirt out of my bellybutton, if I tried. And this happens all the time, dang it!

My favourite gadget is….

… a Jimi Hendrix edition wah-wah pedal. ‘Scuse me, while my guitar gently weeps.

… acting my age. Though, I’m afraid I’m starting to look it now. The mirror has suddenly become my nemesis. Damn you, bathroom mirror (splashes a glass of merlot on it)!

… Where ya from, boy? That’s what I get for being a lone Metro-raised Asian (and not looking my age) here in ye olde wild wild west. It’s quite an education, I tell ya.

It’s not fashionable, but I love….

… not being fashionable, at all. It’s quite inexpensive, to be honest. Besides, the Joneses don’t live in my neck of the woods, so there’s no one to keep up with. Lucky me!

The last big belly laugh I had was…..

If only I could be sure….

Friends say I am….

… deep. No wonder sometimes I feel like drowning (in my own philosophical pool, perhaps).

The song I’d like played at my funeral is….

… one I have yet to write. But actually, that’s kind of morbid, don’t you think? So maybe I’ll opt for, ummm… Someone Saved My Life Tonight (no, not sugarbear, silly). Or, how about… Goodbye Yellow Brick Road? Yeah, yeah! That’s it! Since I’m getting off the road to nowhere and am now on the road to somewhere, it would be perfect, I think.

… is that I might succumb to fear itself. It’s possible, y’know. Since, contrary to popular belief, I am not fearless, at all.

At the moment I’m reading…..

… Choosing Civility, by P.M. Forni. This dude was born and raised in Italy but eventually moved to the States and have since learned the value of practicing considerate conduct in everyday life by comparing the two seemingly different worlds he’s lived in. I believe that it is to one’s great advantage to learn (or even immerse into) a culture other than his/her own. Because, the more you know, the more you’ll understand. And the more you understand, the less questions you’ll have. And the less questions you have, the more you’re capable of accepting people for who they are. And the more people accept each other, the better the chances of this world shrinking into a nice little beach bonfire circle of sorts!!! And that, my friends, is what I call… California dreaming. Peace, Love and Harmony, y’all! Didn’t I say, the sixties rule?

At the moment I’m listening to….

… a lot of struggling, yet unbelievably talented indie artists you’re probably never going to hear about. Possibly, because their music is not quite the flavor of the month. Ever. Usually, I listen to new rock with a 60’s vibe. Right this moment, it’s The Nines. A Canadian power trio that combines raw guitar with Beach Boys type of singing. Also, there’s this band from London called Jackdaw4 that I have been crazy about for maybe a year now. They blend Queen-like harmonies with Magical Mystery Tour quirkiness. You should treat yourself and listen to Jesus Wants My Soul Back. It’s a thing of beauty!

My favourite work of art is…..

… one I create myself. Usually, through an altered photograph, a written song, or even a simple dish I happened to whip up in the kitchen. Nothing spectacular, by any means. Just my fave. Simply because I believe in me. Silly and all. 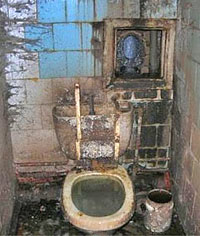 … at a construction firm in Atlanta, GA where I was tasked to clean a bathroom so filthy it should have been nuked instead. Let me put it this way… this photo you’re looking at is STERILIZED in comparison. I gotta admit, it hurt my rock god ego a little, but… oh well.

They loved me there, though. That bathroom, at the end of the day, was gleaming you’d be blind to look without your sunglasses on.

… what if people cared for each other more than themselves. Yeah! Imagine a world without money, door locks, plastic surgery or weapons. All in all, aren’t they all just bricks in the wall, anyway? Or so I’ve heard.

Well, there you go. Everything laid bare for the whole world to see. Now, who’s brave enough to follow suit?

This site uses Akismet to reduce spam. Learn how your comment data is processed.